A few years ago, Bob – who farms in Macon and works for the Norfolk Southern Railroad – was the one who didn’t have time for the colonoscopy. With no history of cancer in his family, he wasn’t overly concerned when he first began feeling ill in March 2012. At first, they thought it was food poisoning. When his symptoms didn’t go away, his doctor diagnosed him with a bacterial illness, then suggested he had Irritable Bowel Syndrome. It took nearly a year for Bob to receive the correct diagnosis – colon cancer. By that time, the cancer had spread to his liver. At just 20 years old, Dana Templeton received a diagnosis that would change her life — and her perspective — forever. In early spring of 2011, Dana Templeton was a petite, attractive, full-of-life 20-year-old with no idea how her life was about to change. In 2010, Guy Corrado was diagnosed with stage IV kidney cancer and his tumor was successfully removed. In 2011, he noticed blood in his urine and even after several visits to the hospital, no one could figure out the reason. A year later, Mr. Corrado chose to make an appointment with Dr. Nicholas Vogelzang, MD at Comprehensive Cancer Centers of Nevada. In 2015, Jim Asbell was diagnosed with stage IV colon cancer that had spread to his lungs and liver. Mr. Asbell chose Bruce W. Porterfield, MD, PhD at Arizona Oncology as his medical oncologist. While Mr. Asbell understood that treatment may not be successful he said “Dr. Porterfield understood my situation and took into consideration my overall wellbeing. He presented a treatment plan that I was comfortable with.” In 2008, Dennis Seifert was diagnosed with stage IV kidney cancer that had spread to his lungs. Feeling little hope, and anger at the fact that cancer had chosen him, Mr. Seifert decided to pursue treatment at Minnesota Oncology where he met Dr. Noel Laudi. I was diagnosed with Stage II – Invasive Ductal breast cancer after I found a lump. Two of my aunts and grandmother have had breast cancer so I’ve gone in for routine exams my whole life. I’ve always had cysts and was told not to worry about them. Before showering one night, I found a lump. At first I didn’t worry about it, but when I still felt it a few nights later, I decided to go in to have it checked out. 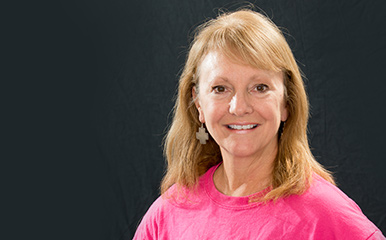 As the program director at the Brewton YMCA, Vivian Layton stays busy around the clock working to help her community. When diagnosed with breast cancer at age 49, she knew she had to ﬁnd personalized quality treatment that would work with her hectic schedule.

With more than 1,380 physicians and over 480 treatment locations across the country, the advanced cancer care you need may be available right in your local community from a practice in The US Oncology Network. Search to see if there is a center near you.